Aba Shanti-I is by far one of the most influential and biggest sound system operators of our time. Aba started off in the 80’s as a mic man for Jah Tubby Sound System, at that time known as ‘Jasmine Joe’. When Joe embraced the Rastafarian faith, he adopted a new and more positive attitude and with his rediscovered faith, a new name: Aba Shanti-I.

Since 1990, Aba has been playing his sound and the music created by his brother Blood Shanti throughout countless venues, festivals, countries and cities across the globe, developing a following covering the widest spectrum of Jah’s humanity. Not to mention being residential sound system at the world-renown University of Dub and Notting Hill Carnival.

People come to discard their worries and to lose themselves in the music and by doing so, cast off the mental shackles from their mind and the yolk from around their shoulders, finding themselves to be at peace and be free. With Aba Shanti-I you are promised to experience the rarest Roots, most exclusive Dubplates, and above all, spiritual uplifting vibes like no other!

Doc Inity has been playing Reggae music in the ghetto hometown of Kwathema since he was 17 years old. Due to financial constraints and an uncanny understanding of the music and empathy for the people, he was playing the music for solely for the messages and positive that served uplift the community. Although apartheid laws and restrictions: there were little-to-no vinyl stores and the music proved very hard to collect/import but he persevered, this became people named this tradition a ‘glory’ not only to Rastafarianism but to Africa as a whole.

Sukh started attending sessions at the age of 15, the first session being Aba Shanti-I, and he describes it as a life changing experience. Inspired by the energy, the spiritual upliftment and vibes within the Dub community, he was determined to create his own contribution and started producing his own tunes by the age of 18, with the schooling of his uncle and Conscious Sounds.

Since 2010 Indica Dubs has been producing some of the toughest releases and providing a range of heavy dubplates to his most influential sound systems. Collaborating with some of the best international Roots/Dub artists; his reputation at the forefront of the Dub scene keeps growing all over the world.

Backed by his main mic man and singer: Danman! Born in St. Elizabeth, Jamaica, Danman is one of the most recognisable veteran singers. Danman has covered the music scene on a local, regional, national and international basis for over 20 years.

Together Indica and Danman have produced some of the most heavyweight releases and exclusive dubplates over the past few years. Including releases such as ‘Righteous Man’, and dubplates such as ‘Satta Massagana’ and ‘When Shaka Come’. Be ready to hear some unreleased and exclusive Dubplates live at this session!

Founded in 2014, they started playing their first sessions selecting vinyl-only. Emphasis on strictly Roots music. Within two years later they unleashed their sound system! They continue to play and organise sessions across the country, spreading conscious message music. We look forward to introducing Dreadical Warriors to start off the night with some killer vintage Roots Reggae music!

To ensure everyone’s comfort and safety inside there’s a limited capacity. To guarantee your attendance, we strongly suggest purchasing a ticket.

See you at the session! 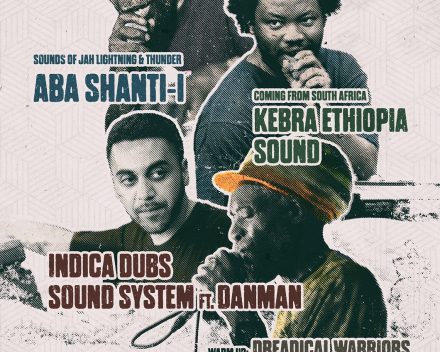